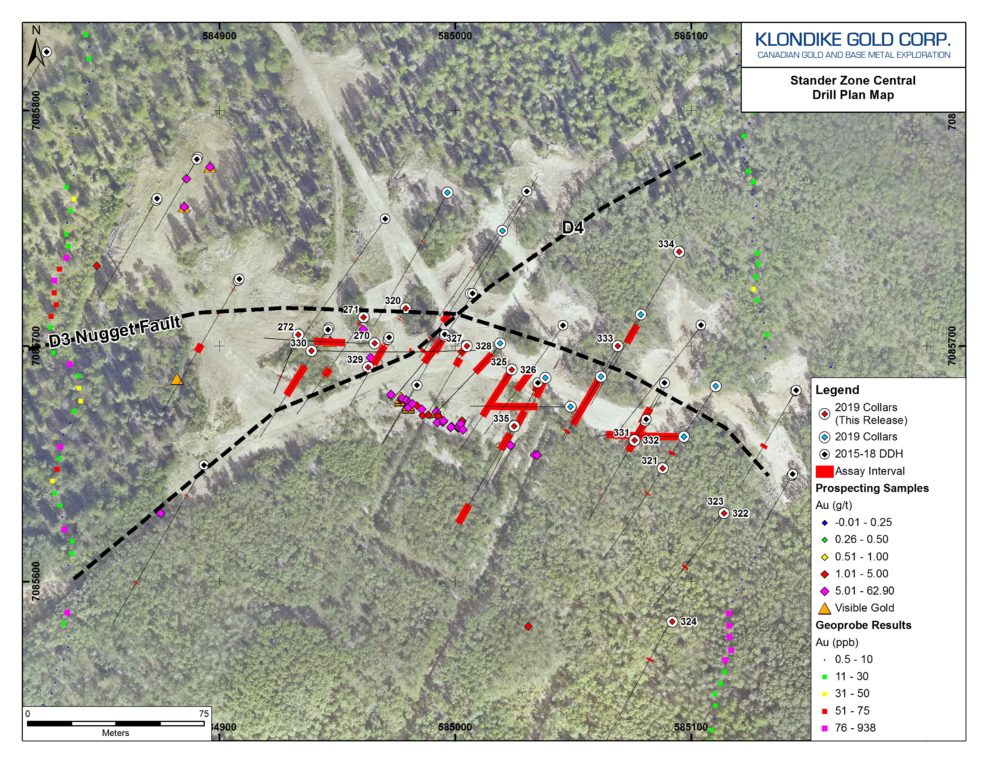 The survey successfully detected interpreted extensions of the Stander Zone gold mineralization as well as identifying a potentially new parallel zone.   These will be priority drill targets in 2020.

The Stander Zone gold mineralization and associated Nugget Fault is marked in geophysics by an intense northwest trending magnetic low, a major “D3” structure as defined in the Company’s orogenic gold model (see News Release December 10, 2019).  This magnetic low target associated with gold mineralization is traceable across the northwestern end of the Klondike District Property for a distance of 15 kilometers.  To aid exploration and understanding of the scale of this gold-mineralized structure, the Company has divided the magnetic low into three five-kilometer segments along a 15-kilometer baseline length as measured from point “Km 10” in outcrop in Upper Eldorado Creek.  The segments of the Stander Zone are shown in Figure 2. 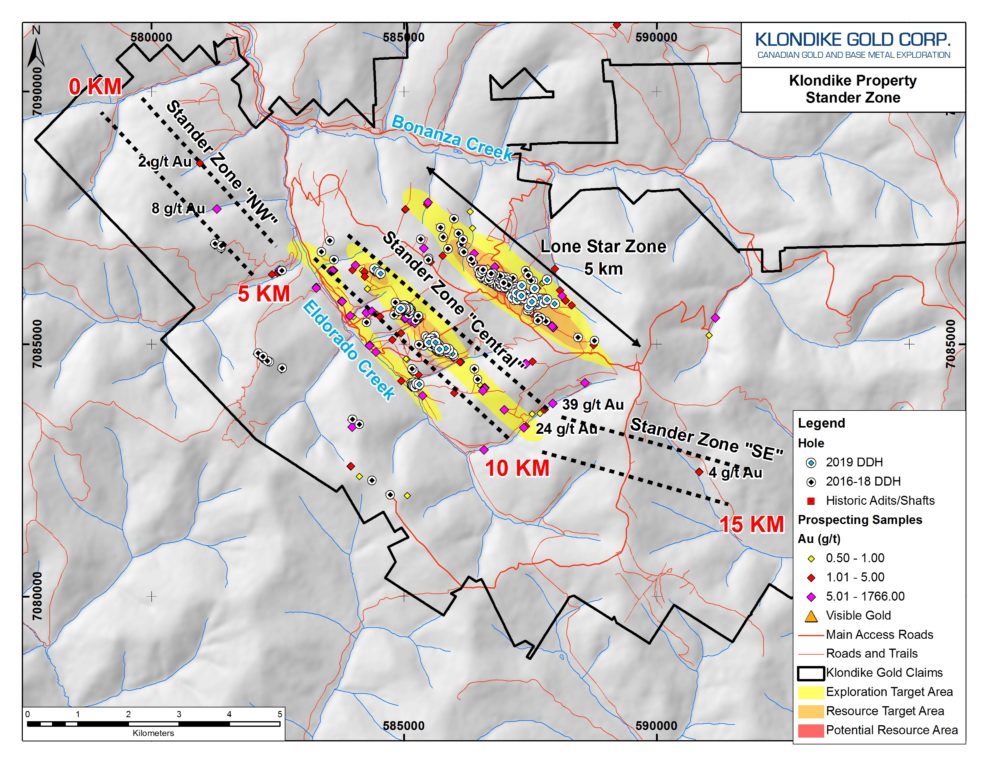 The northwest 5-kilometer segment from “Km 0” to Km 5” (“Stander Zone NW”) has had no systematic exploration.  Prospecting within this segment located an historic (c.1900) undocumented bedrock shaft with quartz in the ‘ore pile’ (assays to 2.3 g/t Au at Km 2) and gold in quartz veining in outcrop (assays to 8.5 g/t Au at Km 3) within a significant fault zone now interpreted to be the northwest continuation of the Nugget Fault.  This portion of the Stander Zone is offset slightly southward across the Eldorado Fault.

The southwest 5-kilometer segment (“Stander Zone SE”) has also had only cursory exploration.  It begins at Upper Eldorado Creek (visible gold, assays to 24 g/t Au at Km 10).  Brief prospecting within this segment in 2019 located gold in quartz veining in outcrop in a creek (assays to 4 g/t Au at Km 12).

Gold in Stander Zone Central outcrops at surface between Km 6.7 and Km 6.9.  The gold is coarse, visible free gold usually 1-mm in size but commonly occurs in larger clots to 1-cm size, hosted by quartz veining.  Individual quartz veins range in size from 0.1 to 1.0+ meters with many close-spaced veins defining individual zones.  These quartz vein zone(s) strike to the northwest adjacent to and above (in the hangingwall of) the controlling Nugget Fault.  Individual quartz veins have a shallow 30-degree northeast dip however the aggregate quartz vein zones geometrically extend sub-horizontally away from the Nugget Fault for approximately 50 meters, forming gold zone(s) exposed at surface and running parallel to the Stander Zone / Nugget Fault along the slope.

The Company announced a drill intersection of 1,009 g/t Au with 1,035 g/t Ag over 1.0 meter in EC19-267 (see news release August 6, 2019).  Subsequently, the Company re-engaged structural consultants SRK (Toronto) who conducted detailed core relogging and examination of oriented core measurements.  This work interpreted the gold-bearing interval to be related to a cross-cutting northeast-trending structure (a “D4” structure in the Company’s orogenic model) that cuts the northwest-trending (“D3”) Stander Zone / Nugget Fault.  This supports the Company’s interpretation that D4 structures are conduits for gold-bearing fluids and that both D4 and D3 structures are potentially gold mineralized exploration targets with a cross-cutting pattern analogous to a checkerboard.

The Company has developed and applied specific custom (“machine learning”) algorithms to the main area of Stander Zone Central gold mineralization which has been used successfully to identify potential new drill targets.  The objective was to test for correlations or linkages in mineralized vein sets in a data-rich area.  Iterative processing identified linkages to veins sets in high priority target areas known to the Company, but also assigned high priority to areas not highlighted by other means.  These new areas are considered for drill testing in 2020 – a successful outcome.  The Company is extending these custom training algorithms to identify prospective areas in data-poor areas such as the Stander Zone NW and Stander Zone SE.  The objective of this work is to develop new tools to accelerate identifying new targets for drilling.

Drill holes EC19-270 to EC19-272 were HTW-diameter and the remainder were NTW-diameter.  Drill holes are generally oriented with 210 azimuth and -55 dip or -85 dip at collar, except where noted in the following table.   The purpose of varying collar dip and azimuth was to test for cross-cutting structures and to obtain structural measurements from the use of oriented core tools.

Location, azimuth, dip and end of hole (“EOH”) lengths for drill holes in this news release are listed in the following table:

Stander Zone samples in this release are from “HTW” and NTW diameter drill core.  Assay samples from drill core are cut using a diamond saw.  Half the core sample interval is bagged, tagged, and sealed; the other half is returned to the core box with a corresponding tag and retained for reference.  Three gold reference standards, blanks, coarse crush blanks, and sample duplicates are routinely inserted as part of Klondike Gold’s quality assurance / quality control (“QA/QC”) program, independent of and additional to the laboratory QA/QC program.  See the Company website for additional information.

Klondike Gold Corp. is a Vancouver based gold exploration company advancing its 100%-owned Klondike District Gold Project located at Dawson City, Yukon Territory, one of the top mining jurisdictions in the world.  The Klondike District Gold Project targets gold bearing quartz veins and disseminations associated with district scale orogenic faults along the 55-kilometer length of the famous Klondike Goldfields placer district.  To date, extensive gold mineralization has been identified at both the Lone Star Zone and Stander Zone, and other gold-mineralized targets have been located.  The Company is focused on exploration and development of its 586 square kilometer property accessible by scheduled airline and government-maintained roads located on the outskirts of Dawson City, YT within the Tr’ondëk Hwëch’in First Nation traditional territory.