The Rabbit Fault is imaged in 2018 airborne total field magnetics surveying to be a prominent NNW-SSE trending basement structure extending through the Klondike District Property from Eldorado Creek in the northwest corner to Gold Run Creek in the southeast corner.

The Rabbit Fault (formerly termed the ‘Rabbit Creek thrust’), is considered to be a first-order basement structure spatially associated with sizeable gold-in-soil anomalies also outlined in 2018 surveying.  The magnetic survey was flown by New-Sense Geophysics, with helicopter support by Trans-North helicopters, QA/QC control and early processing by George Lev, with post-processing by Campbell and Walker Geophysics Ltd.

Nine significant extensive gold soil anomalies have been identified from 2018 surveying in proximity to the Rabbit Fault through the length of the Klondike District Property.

The nine anomalies range from 1 kilometer to 4 kilometers in length.  Soils are considered anomalous above 10 ppb Au (90th percentile), with core anomalous areas from 30 – 70 ppb Au, and highs from 70 ppb Au to a high of 2,223 ppb Au.  Each individual soil anomaly is at least 1 kilometer in length observed on survey lines 400 meters apart.  Anomaly widths range from 100 meters to over 1,000 meters with soil stations spaced 50 meters apart.

These results from regional soil sampling combined with airborne magnetics has outlined new extensive gold anomalies associated with a major structural break which supports the hypothesis that the Klondike District has significant prospectivity for orogenic gold mineralization.

Soil sampling programs undertaken during 2018 collected 5,800 soils at 50-meter intervals on lines spaced 400 meters apart; these cover about 25% of the Klondike District Property overall.  Soils were collected by GroundTruth Exploration of Dawson, and by Klondike Gold personnel.  All soils were analyzed by Bureau Veritas in Whitehorse and Vancouver.

A systematic structural mapping survey broadly covered the length of the Klondike District, with focus on the known areas of gold mineralization between the Lone Star and Nugget Zones between Bonanza and Eldorado Creeks.

Results from structural analysis has documented a previously unobserved orogenic event in the Klondike area and linked this event with gold mineralization.  The structural observations help explain the origin and mechanics of gold mineralization associated with faults, such as the Lone Star Zone along the Bonanza Fault, as well as explain gold along newly identified near-orthogonal oriented younger faults, such as is interpreted at the Gay Gulch prospect among others.

The new structural history of the district provides a coherent structural model and more accurate exploration framework to explore for gold mineralization.

These structural features and orogenic history have recently been recognized and documented at the Coffee gold deposit and reported in the Golden Saddle deposit area.

Prospecting is a reconnaissance tool conducted in areas that have little geoscience information.  Prospecting from 2015 through 2018 has yielded significant discoveries, and now with additional systematic surveying described above these efforts can be integrated into the Company’s overall exploration model.  Prospecting efforts have been directed towards finding old bedrock workings (adits and shafts), finding and documenting visible gold in outcrop, as well as more traditional activities such as sampling outcrop and float for chemical analysis targeting anomalous gold.

A total of 76 historic shafts or workings targeting bedrock mineralization have been discovered within the Company’s property, documented with GPS, photographs, and rock samples where possible.  The workings tend to align along gold-mineralized faults.

With respect to the nine areas of gold soil anomalies identified in 2018, prospecting from 2015 through 2018 has occurred within four of those nine areas.  The Lone Star soil anomaly has had the most work, with 334 rock grab samples assayed; 96 samples contained >0.5 g/t Au with 48 samples over 5 g/t Au, to a high of 1766 g/t Au.

Three soil anomalies in the Gold Run area have seen some prospecting work.  The Gold Run Creek soil anomaly has had 142 rock grab samples assayed; 33 samples contained >0.5 g/t Au with 19 samples >5 g/t Au to a high of 55 g/t Au.  A small part of this target area was drill tested with 4 holes in 2018.  Two other soil anomalies have seen very little work with 57 and 21 grab samples assayed; the former area had 4 samples >0.5 g/t Au with one high of 64 g/t Au, and the latter had no significant results.  The remaining four new gold soil anomalies have had no work on them.  Note that prospecting grab samples are selective by nature and values reported are not representative of mineralized zones.

Prospecting was undertaken by Klondike Gold personnel primarily under the direction of W. Keats of Gander, NL. 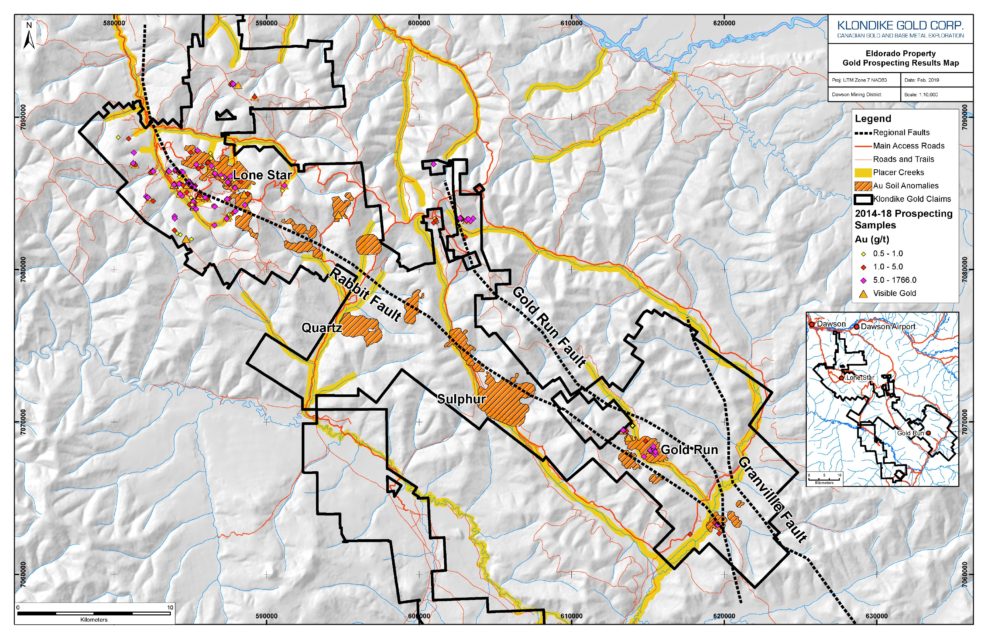 Klondike Gold Corp. is a Canadian exploration company with offices in Vancouver, British Columbia, and Dawson City, Yukon Territory. The Company is focused on exploration and development of the Lone Star gold target at the confluence of Bonanza and Eldorado Creeks, within a district scale 557 square kilometer property accessible by government maintained roads located on the outskirts of Dawson City, YT within the Tr’ondëk Hwëch’in First Nation traditional territory.