Vancouver, British Columbia, Canada, August 18, 2020, Klondike Gold Corp. (TSX.V: KG; FRA: LBDP; OTC: KDKGF) (“Klondike Gold” or the “Company”) is pleased to announce results of Phase 2 and 3 diamond drilling at the Stander Zone and Stander Zone ‘extensions’ (described in News Releases June 1, 2020 and July 7, 2020) on the Company’s wholly owned 586 square kilometer Klondike District Property, Yukon Territory.  The drill program successfully constrained the geometry and boundaries of gold mineralization and the consistency in grade of gold mineralization contributing information towards resource delineation.  Information obtained from results will be used to prioritize next phases of drilling scheduled to commence in late August.

Peter Tallman, President and CEO of Klondike Gold stated “The drilling has answered a question about the gold veining orientation required to frame a resource model; it is sub-horizontal, and this result also contributes important information for future targeting of the Stander Zone and adds confirmation to the Company’s guiding geologic and structural model of gold mineralization in the Klondike. The Nugget Fault is now interpreted to have multiple horizontal gold-bearing quartz vein arrays generated adjacent to the fault, allowing the Company to explore the Nugget Fault along strike for high grade quartz vein areas at surface as part of the overall objective to move beyond exploration and towards resource delineation”.

The Company has received assays from all five holes of the Phase 2 diamond drilling program targeting a 100-meter length of the Stander Zone along the Nugget Fault.  The short five-hole program all intersected near-surface gold mineralization in all holes and successfully identified areas for further drilling.  The best result from the second hole drilled, EC20-350, intersected 7.57 g/t Au over 10.5 meters from 48.0 meters within a larger envelope of 3.93 g/t Au over 21.0 meters from 46.0 meters downhole.

The longitudinal section below shows three ‘levels’ of quartz veining with depth, with individual gold intersections in each drill hole ascribed a “Level” (counting from surface) in Summary of Phase 2 Results in Table 1. 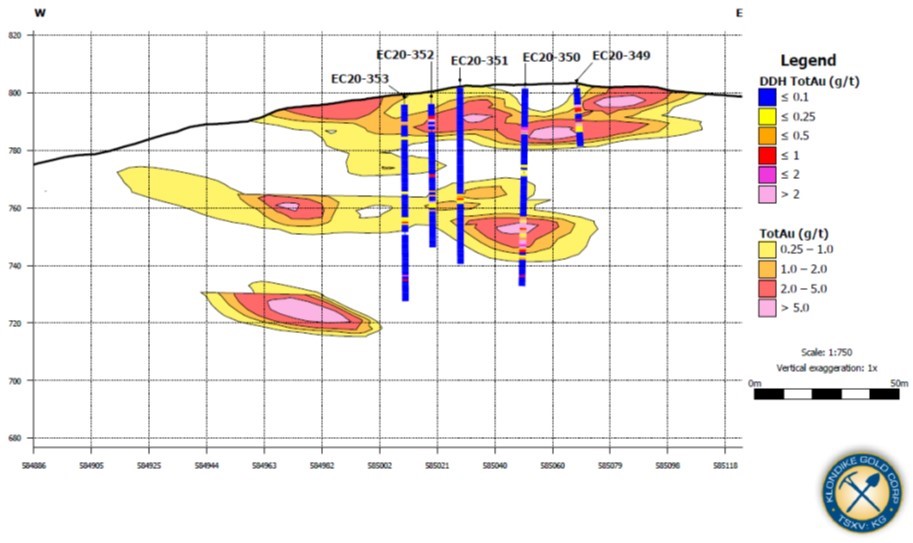 EC20-350 tested Level 1 and Level 2 quartz veining and intersected both.  The ‘Level 2’ intersection of 7.57 g/t Au over 10.5 vertical meters is within the main near-surface area of gold mineralization.  Due to topography, the ‘Level 2’ quartz veins shallow towards surface to the west.

Figure 2 below is a similar view as Figure 1, but shows geology and the localization of gold along the “Felsic Schist” and “Intermediate Schist” contact termed the Nugget Fault within the Stander Zone.  All the gold so far has been intersected at or near surface.  The Stander Zone remains open. 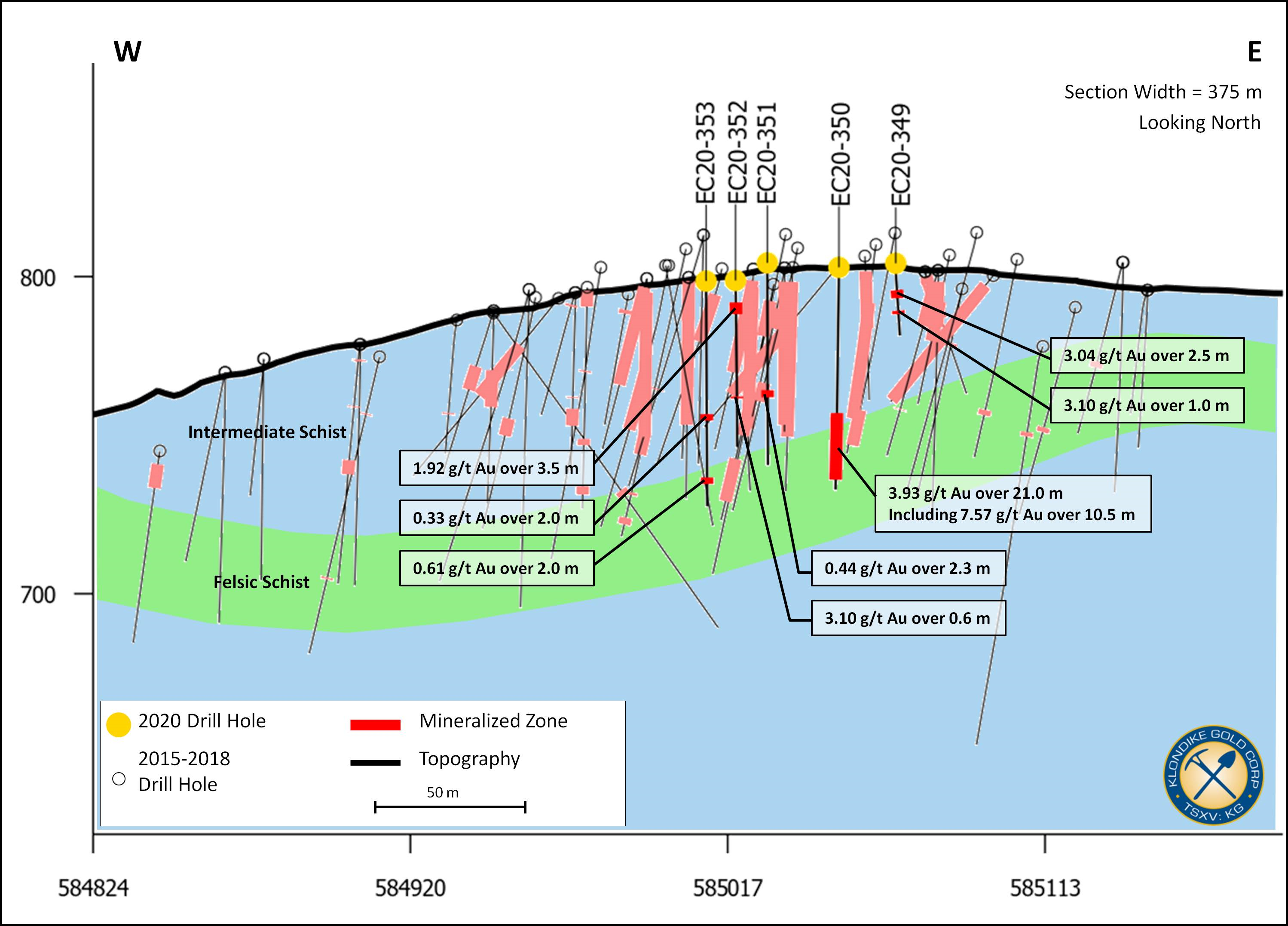 Five short drill holes within the Stander Zone tested the near-surface sub-area where gold mineralization outcrops over a 100-meter strike length shown in Figure 1.  Intersections are assumed to be approximately true thickness however work is ongoing and this interpretation may change.  A total of 280.27 meters of core was drilled.  All holes had a -90 degree angle from surface as noted in the following Drill Hole Summary Table. 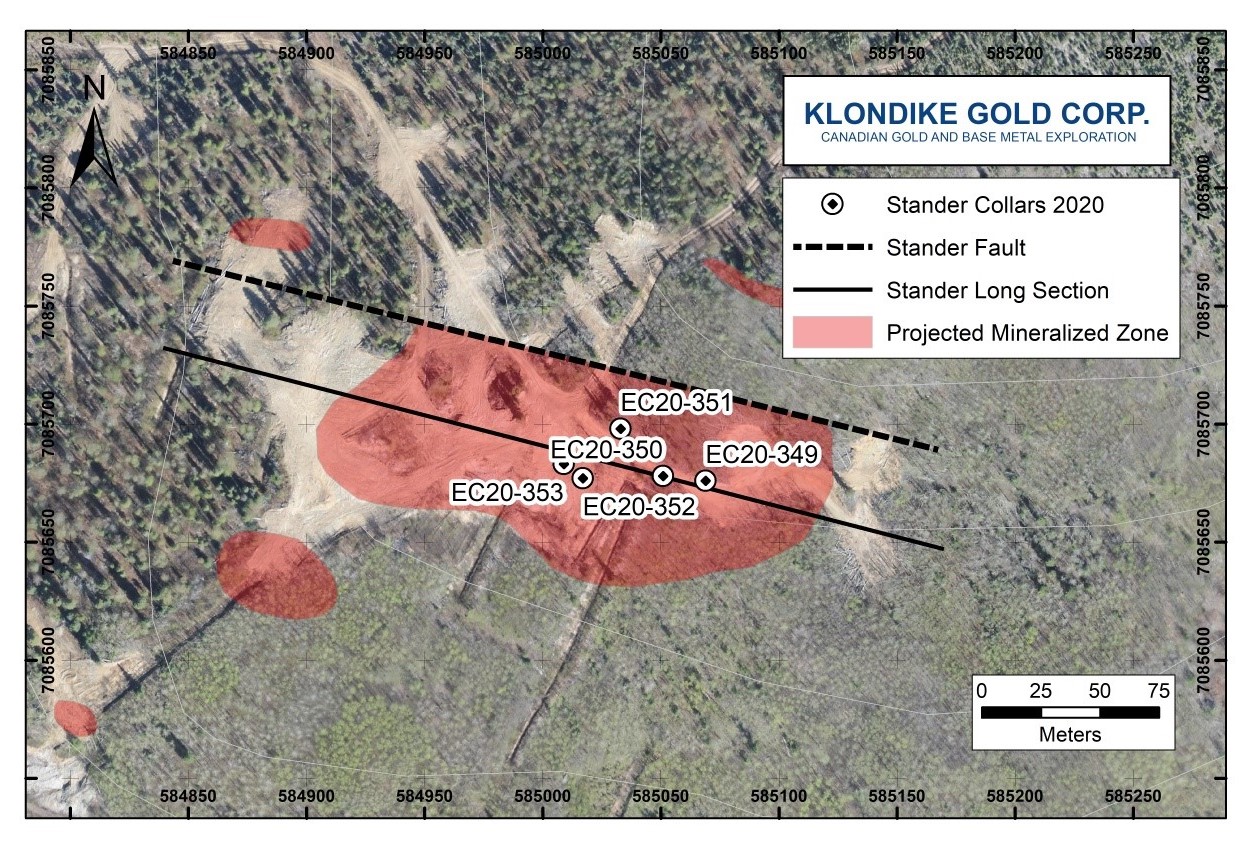 The Stander Zone is comprised of gold-bearing quartz veining localized adjacent to the northwest trending “D3” Nugget Fault.  Typically, gold occurs as visible 1mm size grains or larger, and can occur in massive cm-scale clots and seams associated with carbonate, as example 1,009.5 g/t Au over 1.0 meter intersected in EC19-267 in 2019, located in ‘Level 3’ of Figure 1.  Stander Zone gold mineralization has been traced by sampling gold-bearing outcrop and local floats in northwest-southeast direction for approximately five kilometers.  The Nugget Fault is associated with gold-in-soil anomalies and presents a distinct signature in both very low frequency electromagnetic (“VLF-EM”) and magnetics surveys.  The Nugget Fault is interpreted as a major ‘second-order’ (“D3”) thrust fault, possibly a splay from the ‘first-order’ Bonanza Fault, cutting an anticlinal hinge that has subsequently been reactivated to create extension and brittle gold-bearing quartz veins.

These results plus subsequent analysis suggests potential for additional mineralization lies along-strike of the Stander Zone and structural repeats of this Zone across strike are interpreted to have lower potential. 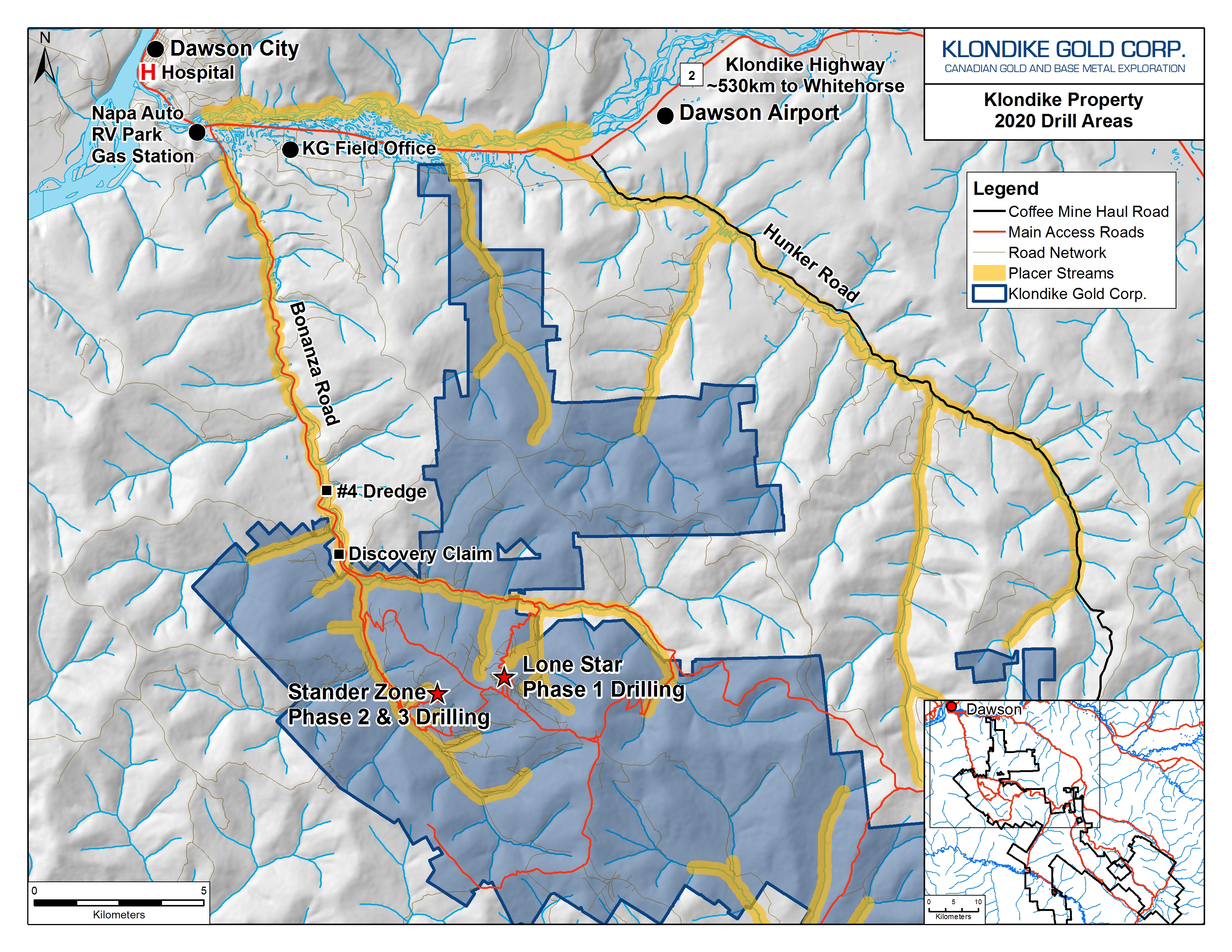 All 2020 drill holes referenced in this release produced NTW (5.71cm dia.) drill core. Assay samples from drill core are cut using a diamond saw.  Half the core sample interval is bagged, tagged, and sealed; the other half is returned to the core box with a corresponding tag and retained for reference.  Two gold reference standards, two blank samples (a coarse and a fine), and a coarse sample duplicate per 100 samples, are routinely inserted as part of Klondike Gold’s quality assurance / quality control (“QA/QC”) program, independent of and additional to the laboratory QA/QC program.

At BV Labs each drill core sample is crushed to 70% passing 2 mm size.  A 500 g subsample is pulverized to 85% passing 75 microns size (200 mesh)(Code PRP70-500).  All samples of 500 g were sieved to 106 microns (140 mesh) for “metallic screen” assaying. The +140 mesh fraction is weighed and assayed for gold by fire assay (“FA”) fusion with a gravimetric finish (Code FS631). A 30 g subsample of the -140 mesh fraction is assayed for gold by fire assay (“FA”) fusion with an atomic absorption (“AA”) finish (Code FA430).  All over-limit results in excess of 10 ppm (10 g/t) for both silver and gold are re-assayed using a 30 g subsample and assayed by FA with a gravimetric finish (Code FA530-Au/Ag).  Total gold grade is then calculated using a weighted average of the plus and minus fraction assay results.

Klondike Gold Corp. is a Vancouver based gold exploration company advancing its 100%-owned Klondike District Gold Project located at Dawson City, Yukon Territory, one of the top mining jurisdictions in the world.  The Klondike District Gold Project targets gold associated with district scale orogenic faults along the 55-kilometer length of the famous Klondike Goldfields placer district.  To date, multi-kilometer gold mineralization has been identified at both the Lone Star Zone and Stander Zone, among other targets.  The Company is focused on exploration and development of its 586 square kilometer property accessible by scheduled airline and government-maintained roads located on the outskirts of Dawson City, YT within the Tr’ondëk Hwëch’in First Nation traditional territory.