Vancouver, BC – Klondike Gold Corp.’s (the ‘Company’) exploration in 2012 involved preliminary evaluation of a gold prospect, the Brook zone—located on the Company’s wholly owned Lewis McNeil Creek property in the Purcell Mountains of southern British Columbia. Exploration on the Brook zone consisted of geological mapping, a ground VLF-EM survey, prospecting and sampling.

Lewis McNeil Creek has traditionally been explored for Sullivan type massive sulphide mineralization. Recently, however, exploration has focused on gold vein and intrusive-related mineralization with the recognition of a gold province, informally referred to as the Central Purcell Gold belt, which stretches southwest from the historical placer mines in the Northern Hughes Range into the central part of the Purcell Mountains. The main mineralized zone on the Brook zone is a north-trending vein-shear system that was trenched in the early 1980s. Detailed mapping this past season indicates that the zone comprises several veined, altered and mineralized shears that are exposed in a zone up to 15 to 20 meters in width. The zone is partially exposed in historical trenches through a strike length of approximately 300 meters. Mapping and the ground magnetic survey indicate that its width increases considerably in size and grade where cut by northwest trending faults. Several of these cross cutting faults are recognized including in the immediate area of trenching where alteration and veining approach 60 meters in width, and approximately 1 km to the north where a quartz vein with visible gold was discovered.

A total of 15 chip and grab samples were taken from the zone in the area of the historical trenching. The highest gold value from the detailed sampling program came from a 20 cm wide goethite bearing quartz vein that assayed 15.3 g/t Au. Three other chip samples contained values greater than 1 g/t Au (1011 – 6004 ppb Au) with several others containing gold over 100 ppb. Samples collected in small exposures along strike also contained anomalous gold content, to 778 ppb in a sample 1 km to the north and 2248 ppb Au in a sample approximately 1 km south of the main zone.

The results of the 2012 exploration program are described in a recently completed provincial government assessment report. This report recommends further work on the property, including extension of the ground geophysical survey north and south of the main mineralized zone into areas of extensive overburden and little outcrop, trenching to determine the extent of the mineralized zone, geological mapping and considerably more sampling. Based on results from this expanded program, diamond drilling along the inferred 2 km long length of the zone may be warranted.

The Brook zone is one of several gold prospects that are being actively explored by Klondike Gold Corp. in the Purcell Mountains of southeastern B.C. These include extensions of the Thea Gold vein system, located approximately 15 km southwest of Brook, the Quartz Mountain area 20 km to the north that contains the small past producing Prices Pit and Golden Egg deposits, and the Northern Hughes Range east of the Rocky Mountain trench.

Trygve Höy, P. Eng. is the qualified person for the purposes of this news release. 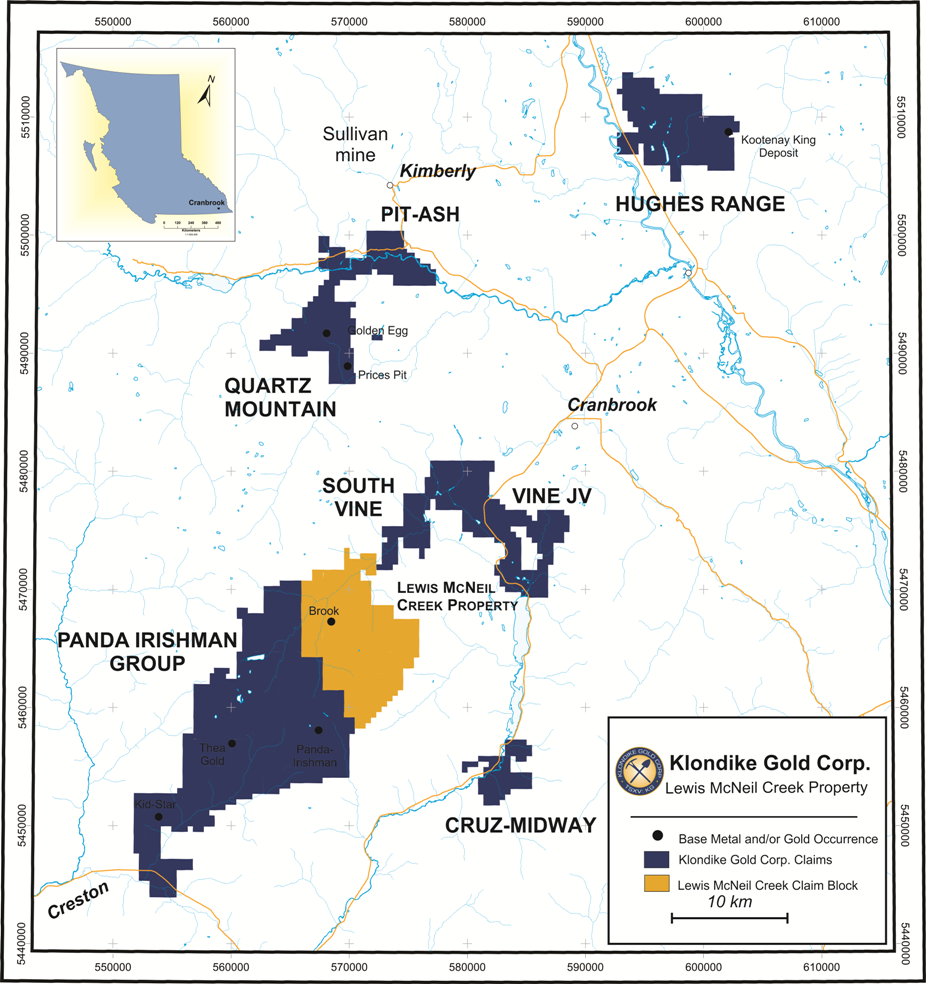