There is a 2% Net Smelter Royalty agreement on the property with a 1.5% buyback for $500,000. In 2012, the property was released from option by Anglo Swiss Resources and Klondike Gold is currently reviewing opportunities for this property.

The property is underlain mainly by mafic to intermediate plutonic rocks of the Eagle Creek Complex which intrudes mafic volcanic rocks of the Early Jurassic Elise Formation. These rocks are cut by prominent northwest trending shears, part of the Silver King shear zone that extends more than 40 km to the south. Several styles of mineralization are recognized, including gold-quartz veins and shear zones, and widely dispersed copper mineralization, typical of an alkalic copper-gold porphyry system.

There is no material work that has been completed on the property during this period.

The Ron claim group is located in the historical “Nelson Mining Camp” in southern British Columbia. Placer mining on Fortynine Creek, on the western edge of the claim group, dates back to the 1867 and the Silver Creek mine, several kilometers south of Ron, had intermittent exploration and development from 1886 to 1958, producing 4.4 million ounces of silver, 6.8 million kg of copper as well as some gold, lead and zinc. Another significant producer in the camp, the Granite-Poorman or Kenville mine, located on the northern edge of the Ron property has mined 181,395 tonnes of ore grading 11.2 g/t gold and 4.7 g/t silver. 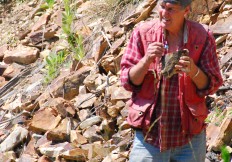 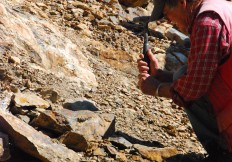